For the 2016–17 edition of the Chapeau, les filles ! competition, the awards ceremony for which took place at the Assemblée nationale in June, the Commission de la construction du Québec (CCQ) handed out three Mixité en chantier (Co-ed Construction) awards, accompanied by $2,000 prizes.

This year, the two students who received awards were:

Creation of an award for vocational training centres

For this 21st edition of the competition, the CCQ has created the Mixité en chantier – Mentorat (Mentorship) award to recognize public educational institutions that help to increase the proportion of women on Québec construction sites. By doing this, the CCQ hopes to raise the visibility of positive models that make concrete gestures to respond to the objectives of the Programme d’accès à l’égalité des femmes dans l’industrie de la construction (PAEF).

Winner of the Mixité en chantier award – Mentorat 2017
Centre de formation Le Chantier
This institution has stood out for its initiatives aiming to increase the number of female students in training, for its cooperation with the stakeholders, and for creation of promotional tools that will be produced with the $2,000 prize that accompanies the award.

The CCQ was particularly proud to be associated once again with the Chapeau, les filles! competition, which recognizes the perseverance of women who have chosen to practise trades traditionally occupied by men. This competition also makes it possible to offer strong and relevant female models who may positively influence women to have an interest in the construction industry.

The CCQ would like to congratulate the recipients, as well as the female students and educational institutions that entered the competition, for their boldness and their determination to leave the beaten path in order to show that women and men can work well together on construction sites. 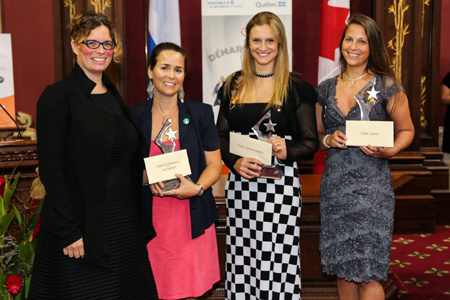 In the photograph, left to right: Véronique Martel, project leader, Workforce Diversity and Development Unit at the CCQ, hands awards to Marie-Christine Lepage, representative of the Centre de formation Le Chantier, and to Vicky Lemaire-Ouellet and Nadia Gravel.
X

By continuing to navigate on this site, you accept the use of cookies and other tracers enabling us to propose content and promotions adapted to your interests and to gather visit statistics for the purpose of improving your navigation experience. You may block the transmission of data at any time by using the Google add-on.